A bunch of random notes from INF251 sorted by lectures. Computer Graphics Pipeline Overview and Splines should be partially structured and readable, the rest are less so.

The graphics card in a computer is responsible for drawing pictures to the screen. The first graphics cards were limited in terms of functionality for the user but over the year manufactorers have been gradually more inclusive in terms of exposing more and more of the underlying graphics pipeline. Graphics programming is implemented from the manufacturers via API’s in a graphics card. Many computer graphics APIs exist and is implemented on different hardware but a few common ones are:

Most graphics API renders geometry using geometric primitives which are rasterized to represent pixels on the screen. Triangles are the most common primitive but various graphics APIs implement quads higher polyhedra aswell. 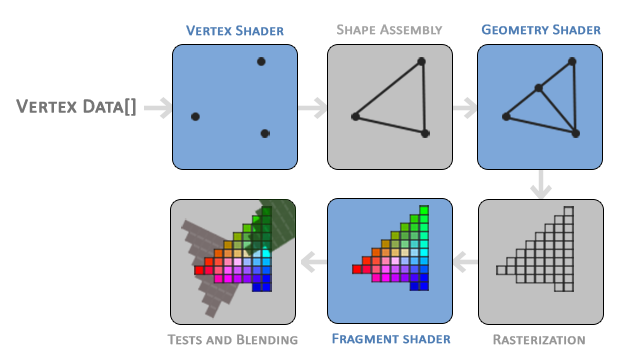 In perspective projections the objects depth affects the height and the width of the projected point. This is the most commonly used projection type and the one who looks most normal to human eyes.

In parallel projections the width and height does not scale with the depth of the scene. The point (x,y,z) projected onto the xy-plane gives the following point on the plane: (x+az,y+bz,0). If a=b=0 the projection is orthographic, otherwise the projection is oblique. Wikipedia: Obligue Projections

which defines x in the interval [0, 1] of a spline using u as the parametric value and a, b, c and d as the four coefficients.

Equation 1 is equal to the matrix product:

where U is the parametric linear values (u), and C is the coefficients that tells the boundaries of the spline. The equation can be further rewritten as

The equation can also be rewritten as

where gk is the geometric contraint parameters and BF_k is the _blending functions or basis functons. This is the normal representation of the generalized spline B-Spline.

A spline surface can be described by a combination of spline functions, which could be represented as the multivariable function